…And cue Dame Julie Andrews running across our screens, chasing after vampires and demons dressed as Mary Poppins (or Maria from The Sound of Music). Now THAT would be an awesome television series: Mary Poppins, Demon Huntress. I can imagine it now: the music, the demons, and Julie Andrews in all of her fabulous glory, cleaning the blood off of her weapons (and blood never hits her clothes, because she is THAT amazing), all while taking care of the children under her ward and singing some wonderful showtune about it. Ahem…

Showtunes and the supernatural – they go hand-in-hand, as witnessed by the brilliant Season Six episode “Once More With Feeling.” If there is only one Buffy episode that must be recommended to any new viewers to the series, I’d choose this one for the songs, the clever and hysterical dialogue, and how left-field this episode is. It’s crazy, it’s zany, there’s a singing demon trying to get Buffy’s sister Dawn, and the Scooby Gang and our heroine herself show off their singing skills. The most surprising singers of the episodes were from the supporting cast (aside from Anthony Head, aka Giles): Tara (Amber Benson), Spike (James Marsters), Anya (Emma Caulfield), and Dawn herself (Michelle Trachtenberg).

More of my recommended episodes will appear in my next blog entry, but this one is dedicated to scenes straight from the episodes. These are particular scenes that stand out to me, and they make me feel all types of good ol’ fashioned emotions – I cry, laugh, shout, or cheer for our heroes and jeer for our villains. Or cheer certain villains (Glory, Mayor Wilkins, Angelus). There is never a dull moment in the Buffy-verse, and even the worst episodes are more entertaining than a lot of movies and TV shows today. There are times when I’ve wanted to throw my remote at the TV because a certain scene made me so mad, and other times I looked for comfort and wanted someone to hold me and tell me that it’s all right (I ended up just holding one of the many stuffed animals that I’ve accumulated throughout my youth).

Here is a collection of most of my favorite scenes throughout all seven of Buffy’s seasons. These are the ones that have stayed with me, that will not let me go, and beg me to re-watch them countless times. The first three seasons are covered here, which are also my favorite (this is an eternal argument among Buffy fans: were the first three seasons the best and the other four throwaways, or are they all important to the full, encompassing story?), but I enjoy all the seasons. Feel free, my Casual Readers, to leave some of your favorite scenes in the nifty lil’ comment box at the end.

I am not covering every episode of each season because some of the episodes are being presented in the next post, and because there are too many scenes in them that are too hard to single out. So don’t be alarmed if you see each season missing a few episodes – they’ll return in their full forms at a later time…if my muse allows me to write my next retrospective piece quickly.

And now, in no particular order (excuse the randomness), and look out for potential SPOILERS:

Episode 3 – “Witch” – Buffy and Giles find out that one of Sunnydale High’s students, Amy, has had her body possessed by her own mother. When they encounter the mother, they make the realization after confronting her about her “daughter’s” actions at school and realize the mother is really Amy. Confusing, I know. The fight scene that occurs a few minutes later is also worth noting, as well as the last scene with the cheerleading trophy.

Episode 6 – “The Pack” – Xander runs with the wrong crowd and the school mascot ends up missing because of this association. Poor pig…

Episode 7 – “Angel” – Buffy and the new tall, dark, handsome, and mysterious stranger in town, Angel, are getting close to one another in Buffy’s bedroom as they share a first kiss, but Angel’s true nature is revealed, frightening the Slayer.

Episode 10 – “Nightmares” – Buffy and the Scooby Gang have their worst nightmares revealed thanks to a young boy in a coma thanks to a tragic incident. Buffy’s worst nightmare turns out to be turning into her worst enemy – a vampire.

Episode 11 – “Out of Sight, Out of Mind” – a student becomes invisible after being ignored by her teachers and fellow classmates, literally. Some of the best scenes in this episode involve flashbacks to Marci Ross’ life as a Sunnydale High students, and how truly invisible she was to everyone.

Episode 12 – “Prophecy Girl” – Buffy and The Master (the Big Bad for this season) face off in an epic battle on the roof above the school library while the rest of the Scooby Gang fight off Hellspawn from the Hellmouth (the main portal of evil in Sunnydale).

Episode 3 – “School Hard” – The great grand entrance of two of my favorite villains of this season, Spike and Drusilla, as Spike runs his car into the sign welcoming travelers into Sunnydale. One of the most iconic scenes from the series. 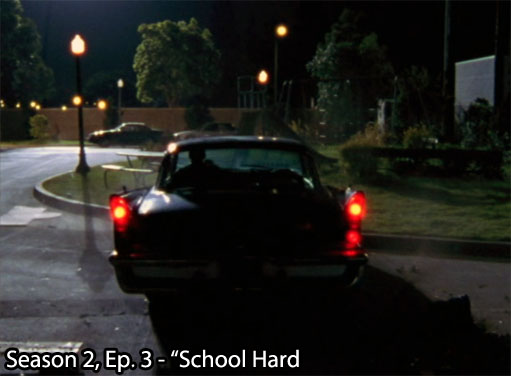 Episode 6 – “Halloween” – Buffy and her friends turn into the real-life depictions of their costumes (Willow as a ghost, Buffy as a Southern belle, Xander as a soldier), thanks to some hijinks from Giles’ old frenemy, Ethan Rayne, and his chaos magick spell. One of the funniest episodes too.

Episode 8 – “What’s My Line, Part 1” – the introduction into the short life of the Slayer Kendra, who replaced Buffy after she suffered an “accident” (i.e. death) in “Prophecy Girl.” Also, three colorful and unique demon assassins are sent by Spike to kill Buffy.

Episode 9 – “What’s My Line, Part 2” – Buffy and Kendra face off against Spike and Drusilla in a church in a climactic battle that has Spike severely injured.

Episode 13 – “Surprise” – Spike gets Drusilla a quite monstrous gift for her birthday: pieces of a blue-skinned demon named The Judge that can burn the goodness of humanity out of someone with his touch. Buffy and Angel also consummate their relationship, with disastrous results (it was a beautiful scene up until that point).

Episode 14 – “Innocence” – Angel reverts back to his sadistic counterpart, Angelus, as he starts to mentally and emotionally torture Buffy after their night of passion together (a Gypsy curse kept his soul intact, but if he had one true moment of passion, it would instantly disappear). Buffy and her allies find a way to kill the “unkillable” Judge (he cannot be killed by any weapon forged), thanks to creative use of a modern weapon.

Episode 17 – “Passion” – Too many scenes to list in this episode, but the one that comes to mind first is Angelus reciting what passion truly is. Great delivery by David Boreanaz, another memorable scene from the series, and some of the best dialogue on TV ever. 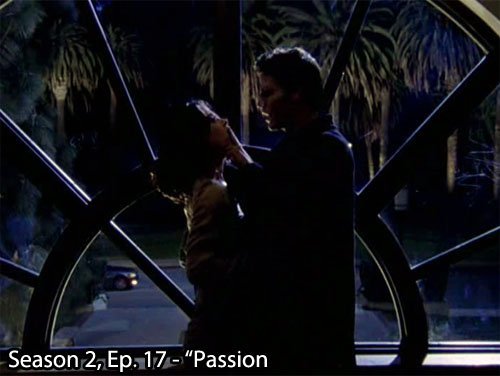 Episode 19 – “I Only Have Eyes For You” – Buffy and Angelus reverse roles as star-crossed lovers when Buffy is possessed by the spirit of a young man who kills his teacher-love, who possesses Angelus.

Episode 21 – “Becoming, Part 1” – Drusilla gains notoriety in this episode for marking a first in her vampire life – killing a Slayer. Too many scenes to list, but this is one of the most tear-jerking scenes. Still makes me tear up a little.

Episode 22 – “Becoming, Part 2” – Too many scenes to list as well in this epic Season Two finale, but the last 10 minutes are epic on a grand television scale, as Buffy and Angelus face off in one final battle as a gateway to a demon dimension is being opened up at the same time. Buffy has to make one of the toughest decisions in her life to stop the demon portal, opened up with Angelus’ blood. You can guess how she has to close it.

Episode 1 – “Anne” – Buffy is in Los Angeles, trying to build a new life after running away from Sunnydale after the end of Season Two and the events that occurred. She meets another runaway and is soon battling a demon that traps lost souls.

Episode 3 – “Faith, Hope, and Trick” – Season Two had me sold as a fan of the show, but this episode helped cement it when my celebrity crush was first seen on the dance floor. The three characters that  make up the episode title show up, and Buffy encounters the new Slayer in town when Faith introduces herself while grabbing Buffy’s stake and staking a vampire.

Episode 5 – “Homecoming” – Buffy and Cordelia (mistaken for Faith) are hunted by various assassins contracted through Trick, who later becomes the Mayor of Sunnydale’s sidekick, in a wicked game called SlayerFest. And it doesn’t help that they’re trying to survive while trying to win Homecoming Queen at their school – Worst Timing Ever.

Episode 6 – “Band Candy” – Another classic Buffy episode. Ethan Rayne returns and “taints” chocolate bars with some chaos magick, turning all of the adults in town back into their teenage selves: mentally. Meanwhile, our teen heroes try to combat the evil of the episode while trying to help the adults retain their adult mentalities back.

Episode 9 – “The Wish” – Cordelia meets a new girl on campus named Anya, but it turns out that she’s a vengeance demon, and Cordelia makes a huge mistake by wishing that Buffy had never come to Sunnydale. We also meet Xander and Willow’s evil vampiric counterparts.

Episode 11 – “Gingerbread” – Evil Hansel and Gretel-like demons convince the parents in the town that their kids are practicing the black arts, which leads to Buffy and her friends facing off paranoid parents and stopping the demons at the same time. Being tied up to stakes can be an issue when you’re trying to survive.

Episode 14 – “Bad Girls” – A very Faith and Buffy-centric episode that inspired many a fan fiction writer to ship the two Slayers with all of the sexual tension and innuendo packed into this episode. The two scenes that jump out immediately are: Faith waiting outside the classroom window of Buffy’s Biology class and drawing a heart with an arrow through it while flirting away, and a case of mistaken identity that changes Faith’s life forever.

Episode 17 – “Enemies” – A Faith, Buffy, and Angel-centric episode that has one of the greatest “Gotcha!” scenes at the end, when Faith realizes that she’s been played the whole time by Buffy and Angel. Backtracking a little, Faith has gone rogue after the events in “Bad Girls” and is working for the evil Mayor of Sunnydale – Richard Wilkins. 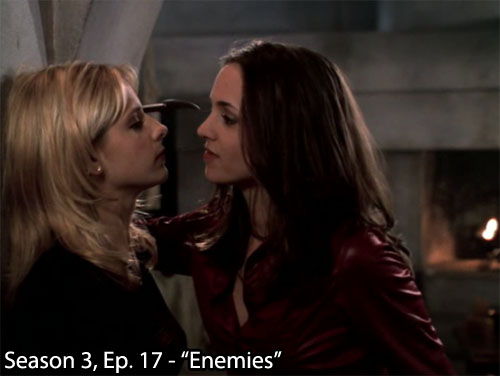 Episode 21 – “Graduation Day, Part 1” – Angel and Buffy are sharing a romantic moment when an arrow hit Angel in the shoulder. Normally an arrow wouldn’t be a pain in the ass…if the tip wasn’t dipped in a mystical poison that slowly kills vampires. The only way Angel can survive is by drinking the blood of a Slayer and possibly killing them, and Buffy knows the perfect candidate. One of the most awesome fight scenes happens between Buffy and Faith at the end.

Episode 22 – “Graduation Day, Part 2” – The final epic battle scene of Season Three sees our heroes facing off against Mayor Wilkins, who turns into a full-fledged demon during the Scoobies’ graduation ceremony, and his minions think that they will easily slaughter the student body – they thought wrong. The students fight back and Buffy lures the Mayor into the high school, which is wired with tons of dynamite, ready to make snake jerky.

4 thoughts on “Buffy the Vampire Slayer Retrospective (3): And These Are A Few Of (Most) My Favorite Scenes – Part One”