Sylent Mari Says: Today’s post is twelve days late, but what better day to publish this than on Friday the 13th? Don’t do anything too crazy, how at the full moon tonight, and throw on your favorite Friday the 13th flick (Love the cheesy goodness that is Jason X). Enjoy this weekend and if you’re going to any comic convention this weekend, have a killer time.

As I’ve mentioned before on this blog o’ mine, Alanis Morissette is my favorite singer and has been for years. Her music has always been a big influence in everything I’ve done creatively throughout the years. In honor of Alanis hitting 40 years of age (I can’t wait to hit my 40’s ‘cause I am done with my 30’s already) and still rocking after all these years, I’m sharing my Top 25 songs (in no particular order).

Yes, kids – Alanis Morissette turned 40 years-of-age earlier this month on June 1st, and that makes me feel damn old, even though I’m in my early-30’s. The picture above was taken more than 19 years ago around the release of Alanis’ breakout international debut album, Jagged Little Pill. Ah, I remember those youthful days of singing along to JLP and driving my parents nuts as I always had the album on repeat. Good times! If an Alanis song from JLP comes on the radio, you bet that I’m singing that song at the top of my lungs and annoying other drivers as I’m cruisin’ down the street on my way to work.

When JLP was released on June 13, 1995 (it’s 19 years old today), it sold a bazillion copies thanks to the many women – both young and old – who related to the album and were probably obsessed with the album’s first single, “You Oughta Know.” JLP has lots of great songs on it, along with great singles that had really good accompanying music videos; two of my favorites are “Hand in My Pocket” and “You Learn.’” If you’re looking for an acoustic, more-mature version of the album, Alanis released Jagged Little Pill: Acoustic exclusively through Starbucks stores on the 10th anniversary of JLP’s in 2005.

My 1st copy of Jagged Little Pill was on tape – ‘member those?

After Jagged Little Pill, Alanis took a sabbatical to India and came back a lot more level-headed, mature, and less-stressed, and that newfound focus can definitely be heard on the follow-up to JLP, Supposed Former Infatuation Junkie. Quite a mouthful of an album title, but catchy. SFIJ was the complete opposite of JLP, and those looking for a sequel to that album were a bit disappointed. Supposed Former Infatuation Junkie is my favorite Alanis album, closely followed by Flavors of Entanglement, because Alanis explored different musical flavors and had many deep and heavy emotional moments in both the lyrics and her vocals. SFIJ was a success, but not the massive one that JLP was, but that’s okay. It’s more of an intimate album that her dedicated fanbase definitely appreciates and loves.

We don’t talk about the Short Hair years…

Alanis released Under Rug Swept and So-Called Chaos four and eight years (2002 and 2004) after SFIJ’s release, both receiving mixed reactions from critics and fans. Out of the two albums, I tend to skip a lot of the songs on SCC – it’s my least favorite of her albums. Under Rug Swept had lots of recorded songs that never made it to the final pressing , so Alanis threw the best of the bunch onto an EP that was released later in 2002 after URS’ release. The Feast on Scraps EP has some really awesome songs, and they could’ve easily replaced the weakest songs on URS.

Oh, did I almost forget to mention that I got to see Alanis live in the front row of my first and only time I’ve seen her perform? I took my younger brother to see Alanis and the Barenaked Ladies in August 2004, and he and I also got the change to meet her, which was totally amazing. She’s shorter than I thought, but mellow and a bit shy. But very polite ‘cause she’s Canadian. /drumroll 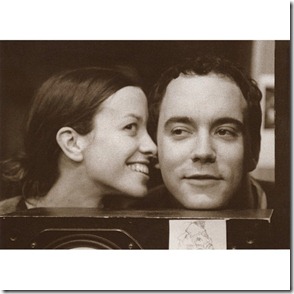 The year 2008 was a trying year for Alanis, though creatively she was back at the top of her game with the release of Flavors of Entanglement. A deeply personal album, it was her post-break up answer to her relationship with Canadian uber-hottie Ryan Reynolds that had ended in…well… Just listen to it. I said earlier that Supposed Former Infatuation Junkie was my favorite Alanis album, but I find myself leaning more towards FOE for my own personal reasons; it’s definitely a very healing listening experience.

Alanis’ latest release, 2012’s Havoc and Bright Lights, was released not too long after she married her husband, rapper Souleye (aka Mario Treadway), and giving birth to the cute kid you see above, Ever Imre Morissette. Trivia-minded Alanis fans will recognize the middle name – it’s her twin brother Wade’s middle name. Havoc is mostly a good record with a few slight musical hiccups, but it’s still a very enjoyable listen. Two of the tracks featured below are the ones I’ve been digging the most since its release.

Do Canadians ever age? They’ve got timeless beauty.

Enough rambling from me. In no particular order, here are my favorite Alanis tracks from the Supposed Former Infatuation Junkie era to now. I didn’t include any songs from Jagged Little Pill ‘cause we’ve all listened to the album more than a few times, amirite? Also, many of the songs below are unreleased tracks and B-sides – some hidden gems in the mix that should’ve been released on her studio albums.

* – Live performance can be seen on The Collection CD/DVD combo set
** – Hard to find single release from Europe, but worth hunting down
+ – Unreleased tracks performed live for the Unplugged release; not found in recorded form