Dana Scully and Fox Mulder like to “get down” on their days off.

I just missed posting this on Gillian Anderson’s birthday. Boo! I got distracted. I blame it on Spotify. But please enjoy this belated birthday post dedicated to two of my favorite actors, and pop culture icons with their memorable characters from that show about government conspiracies and Unresolved Sexual Tension (UST) —

Ha! Tricked you into thinking that this was the next part to my X-Files Retrospective! Sadly, it is not, but I just finished my most recent marathon viewing of the show just a few days ago. With all of the episodes still fresh in my head, I will return to them shortly and share my favorite episodes, characters, and so much more. And the guest stars – too many actors & actresses to name as the list is quite large and filled with many well-known names to television and film fans.

This post is to celebrate the awesomeness that is the combined pairing of David Duchovny and Gillian Anderson, who both celebrated birthdays this week. Today is in fact Gillian Anderson’s birthday, so let’s give a shout-out to everyone’s favorite skeptic! Cool, calm, opinionated, and never bowing to pressure and cutting all tension in a room with her patented Gaze of Skepticism and No Bullshit, Anderson’s Dana Scully is still a geek favorite who still has lots of fans 21 years later.

Since the end of the X-Files, Anderson’s start has continued to shine, and she is now celebrated and honored as the talented and extinguished actress that she is. She has starred in many stage, film, and TV productions, and in fact recently appeared in three TV shows – two U.S.-based and one UK-based: Hannibal, Crisis, and The Fall. Crisis was a mess of a show that was canceled about two months ago, and though Anderson shined in her role as Meg Fitch, the rest of the story and cast was very hit-or-miss. On Hannibal, she portrays Hannibal Lecter’s own psychiatrist and colleague, Dr. Bedelia Du Maurier, and her interactions and scenes with Mads Mikkelsen’s Hannibal Lecter are beautifully done. It’s a great example of the acting talents of both actors as they shine on the series. 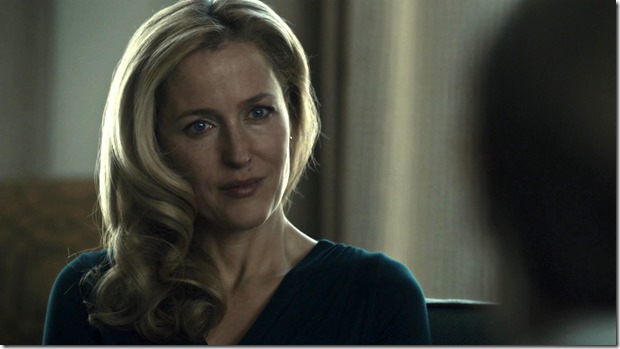 I wish she were my psychiatrist. Or just stare at me that way. *le sigh*

The Fall is my favorite of Anderson’s most recent television appearances. A classic cat & mouse game with a twist, Anderson plays Detective Superintendent Stella Gibson, who is helping oversee the re-opening of two unsolved murder cases that have similarities to one another. The murderer is a handsome family man, played by Jamie Dornan (“Sheriff Graham/Huntsman” from Once Upon A Time and “Christian Grey” in the new 50 Shades of Grey film), who stalks his victims for days before killing them in the quiet of the night, leaving them posed for police to find them. The first season was shown exclusively in the U.S. on Netflix, so I suggest watching all six episodes and waiting in anticipation for the second season to arrive here shortly.

Anderson’s X-Files partner/lover/baby daddy, David Duchovny, also celebrated his birthday recently on August 7th. He hasn’t been resting since the X-Files either. Also appearing in many films and TV shows, including a starring role as Hank Moody on the recently-ended Californication, Duchovny returns to primetime TV with his new event series, Aquarius. Oh, how cute! Mulder and Scully are on the same channel again! (Hannibal airs on NBC, as Aquarius will be soon). In Aquarius, Duchovny plays an FBI Agent (*cue rim shot*) who’s hunting down Charles Manson and his acolytes.

Still quite the handsome devil.

The X-Files has been gathering steam again with its current comics run of a brand-new season (Season 10), as well as a new board game coming out very soon that I am dying to get my hands on. I love jumping onto Tumblr and seeing all of the new fans discovering and watching the show for the first time, after seeing Anderson and Duchovny in their other projects. For the newbies in the fandom, here’s a list of some of my favorite X-Files episodes featuring Gillian Anderson and David Duchovny giving excellent, stand-out performances filled with laughter, drama, sorrow, romance, and so much more:

“You have the right…to remain sexy. Now carry on, and where’s my pie?”

NOTE: There aren’t any Season 8 or 9 episodes listed because Mulder appears in a handful in both seasons. But I liked John Doggett and Monica Reyes, so give them a viewing.