Sylent Mari Update: With Lost Girl having a super-sized fifth season, the first batch of new episodes will premiere on Sunday, December 7th at 9 PM EST. That gives all fans (new and old) plenty of time to marathon the show a few times. The season will be split into two, with the first eight episodes airing followed by a break and then the last eight – similar to what Breaking Bad  did, though they split the episodes into two seasons. Netflix currently has all four seasons streaming through its service, so it’s a perfect way to catch up. 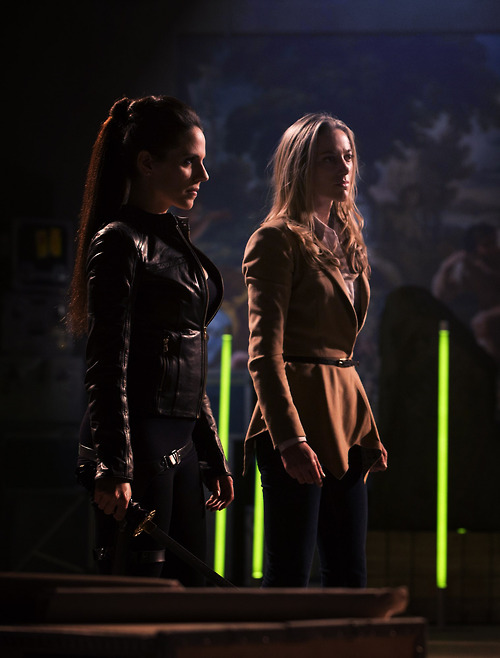 Well, what a way to start a Monday. I just posted about my Lost Girl adventures from Fan Expo Canada last year, and then this news comes out. Oh – it was not the way I wanted to start my Monday. Maybe if I go back to sleep, it’ll never have happened…but it has.

Without prolonging the way any longer, here’s an update about the show:

Showcase, the home of Lost Girl, posted a video message this morning from star Anna Silk (Bo Dennis). It’s a very bittersweet message for the fans of the show, and one that we always dread hearing. After five years,  Lost Girl  will be ending after this season. If you’re a fan of the show, take a few minutes for that news to sink in. It’s still taking me some time to absorb the news. I admit it – I started crying. This year has been a really crappy year for many reasons, but sitting down to watch  Lost Girl  with friends was one of the highlights. Traveling to Fan Expo was the hugest one. If you can hold back a few tears, check out this video from Anna –

I had already decided this past week that I wanted to travel to Fan Expo again next year ’cause I had so much fun up there, and it was one of the coolest things I had ever experienced. Now I will make the pilgrimage again, but this time to celebrate the show that brought me up there in the first place. I can imagine that any panel or celebration that they will do in honor of the show will be quite the epic and bittersweet ending for a show that has touched so many people in different ways.

This newest (and last) season will be super-sized by three episodes, bringing the grand total to sixteen episodes for the whole season with a massively awesome conclusion (I’m hoping). Season 4 was a good but such a strange season, and it took such a crazy direction story-wise towards the end and I disliked it. I’ll get into that later when I do a full rundown of the show here soon, before the start of Season 5.

I have much more to add, but I’m still in a state-of-denial. Here’s an article also posted this morning featuring Anna Silk and it has a little more insight into Season 5. She personally wanted to see one more season, but here’s hoping that Season 5 is the best yet. As a fan of this show, I’m thankful to the cast and crew who have listened to the fans and tried their best to fulfill all of the fans’ wishes throughout the seasons story-wise and character-wise. It’s more fan respect and interaction that I’ve seen than in other shows like Once Upon A Time, but that’s another post for another day.

If you need a huge, fellow Faenatics, post a comment below and I’ll give you a virtual hug. :( I will be sharing more of my thoughts, as I’ve said, in a future post about how much this show has meant to me personally over the past few years. Few shows have touched me as deeply as has  Lost Girl, and I know that many other fans feel the same way as well.