As the blog title states, I had to step away from the blog for a few weeks to “find myself.” Actually…a bit of stress in my Real Life caused me to step away from my virtual sanctuary to deal with a few issues before returning. And I have returned with (somewhat) of a vengeance! Is the crisis averted? No, but it’s getting better. It was something that didn’t directly involve me, but I’m still connected to it, but all’s well –for now.

Besides hiding in my apartment and Netflixing the same three movies every other day (Hellraiser, The Crow and Hellbound: Hellraiser II), trying to keep work from imploding, and being way busy for some reason, I also got to spend some much needed hang-out time with one of my closest friends, and just in time for Halloween. And I would also like to thank this for also killing any potential social or time away from the house I might’ve planned:

I’ve been playing World of Warcraft for over six years now, having gotten into the game after teasing a former co-worker who used to play it, and he got me hooked. Years later and I’m still battling away. I was rushing to get a few of my characters up to the then-max level of 90 before the newest expansion, Warlords of Draenor, became live yesterday. Then a set-back hit: I ran out of my prepaid time and won’t be able to ‘kill things in a virtual world that prevent me from kicking ass in Real Life’ ‘til next week.

With all of this new free time and being able to get back into my creative groove, you’ll see me trying to post on a more semi-frequent basis. I have a few posts lined up that I will finish writing and posting by this weekend (fingers crossed that the universe decides to work with me for once).

+ Today’s Lost Girl Countdown Re-watch episode [11.17.14]: Season Three’s “There’s Bo Place Like Home.” After learning that she’s undergoing a Fae right-of-passage several hundred years early, Bo discovers that she has some obstacles from her past that are blocking her current path. That means that she’ll have to face her family for the first time since she fled home and made it to where she lives now with her “Faemily.”

+ I tend to complain about the current direction Once Upon  A Time has been in lately, a creative slump that’s been evident since the end of Season Two. While it’s fun to hang out with my mom on Sunday nights and roll our eyes together at the show for different reasons and shout at the TV over the inanity of the current storylines, there are some redeeming values. The first season is one and the other big one is fan-favorite villain/hero/BAMF/MILF Regina Mills, aka the Evil Queen. Mom and I didn’t like her at first, but she’s the only reason we’re sticking around this season. And you can’t have an Evil Queen post without lots of Evil Cleavage.

+ I have another music-related post with some of my favorite tunes that everyone should check out.

+ Other random posts about things I dig that you might dig too.

Here’s a list of cool geeky things that have made me quite the happy gal the past couple of weeks:

Showcase released a new promo that one-up’s the trailer below with new scenes from the upcoming scene. I’m not gonna spoil anything beyond “ninja training.” The show returns in less than three weeks, and we fans are hungering for more. No promo photos have been released yet, but I’ll keep watching the promo a few more times.

How cool does the promo look? And…ninjas.

Showcase releases a Lost Girl teaser for Season 5; check out the “Faewell” videos

When are the Fae gonna learn that you never screw with Bo and her “Faemily?” Bo has proven many times throughout  Lost Girl that she can hold her own, and she’s gonna prove that to her father when she finally confronts the bastard in Lost Girl’s fifth and final season. This short teaser has a pissed-off Bo telling her father that he’s next on her hit list, and we should all be very, very scared.

No other promos have been released yet, including new cast photos or any other information about the season. I’m actually fine with that because it builds up the mystery behind the newest season, and the less we know, the better the surprises will be.

Fun Fact: I have a dog named Lestat. I wanted to name him Angelus, but Lestat fit him much better.

I’m a huge Anne Rice fan. She’s one of my favorite writers, along with Stephen King and Christopher Pike, and many others. It seems like Lestat visited her in her dreams and kept urging her to continue his tales, which she dutifully did by writing and releasing her newest book, the appropriately-titled Prince Lestat. Yes – the Brat Prince himself is now “officially” a prince. I’m a bad fan and have not had a chance to buy the book yet because I’ve been low on the cash front, but I plan on getting it and reading it during my five-day Thanksgiving break. Here’s the cover of the book:

Sam Raimi and Bruce Campbell team up for an Evil Dead TV series!

I am very excited for this. Usually I am indifferent or extremely put-off with sequels to movies that have come out years ago, or sequels that mess up an original movie’s timeline (I’m talking about you, Terminator: Genisys). But this news means that Bruce Campbell and his awesome mug will be appearing on TV again, after a recent stint on the USA Network’s spy series Burn Notice. I also loves him as Autolycus on Xena and his series Jack of All Trades. I’m pretty sure that was the name of the show, but it was a campy and kind of fun show. Bruce will of course be appearing and reprising his role as Ash ‘cause really – do you expect anyone else to play him? The series will be premiering on STARZ, so we’ll probably be seeing tons of nudity and gore. Sam Raimi will be creating and producing the series with long-time creative partner and producer Rob Tapert, who co-created Xena with him and is also married to Lucy Lawless (lucky bastard). 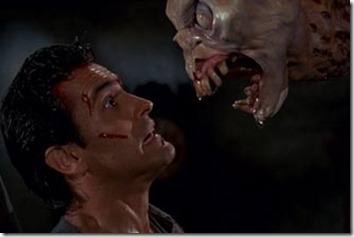 Orphan Black and Lost Girl are the two shows my roommate/friend and I are most addicted to. We discuss the episodes after they’ve aired, come up with theories about what’s going on, and just have total fangirl meltdowns when moments we didn’t expect occur. With one of those shows disappearing, we are hoping that Orphan Black stays on the air for a really long time. We can’t deal with any more shows that we love being cancelled or ending so soon.

The teaser is very cool and the show is returning March 2015  on SPACE in Canada and BBC America in the U.S.A., a month earlier than it usually premieres. When I travel back up to Canada next year, I’ll be also geeking out over the show again. And next year Tatiana Maslany better win a Golden Globe and an Emmy, ‘cause she is one of the most talented actresses of her generation. Hell, I’ll go a step further and say she’s one of the best actresses out there. We all know it and it would be nice if the major awards would acknowledge her immense talent too.

One of my favorite new shows from the past year was a British/Irish production called The Fall, which Netflix picked up streaming rights when the series first premiered. Gillian Anderson, one of my favorite people in the world, my #1 celeb crush, and a woman who has always played strong female characters, stars as Detective Superintendent Stella Gibson. Jaime Dornan, who will now forever be known as Christian Grey from that godawful upcoming film 50 Shades of Grey, also stars in the series as Paul Spector. Paul has many dark secrets, and Stella is hot on his trail as they play a sinister cat-and-mouse game, with Stella trying to protect the young woman of Belfast from Paul’s dark desires. Season Two will start streaming January 15, 2015 in the U.S.A., but the series is already airing in Ireland on RTE One and in the UK on BBC2. If you haven’t started watching this series yet, DO SO IMMEDIATELY.

I admit it – I’m not the biggest Laurel Lance fan. Well, me and many other fans of the show Arrow. She has some really annoying character traits, but she has definitely been growing on me a little in this newest season. I’ve liked Katie since I first saw her as the badass demon Ruby on Supernatural – at least the first incarnation of the character. I think she’s a decent actress, and one of the only good things about the A Nightmare on Elm Street remake that came out a few years ago.

I was a big fan of Caity Lotz’s Sara Lance and her interpretation of the “first” Black Canary. She was one of my favorite characters, and SPOILER ALERT!] when they killed her off in the premiere episode of Season Three, I was crushed. My mom was more-so because Sara was her favorite character, and she even threatened to quit watching the show because she was so bummed out (my mom is secretly a fangirl who has her own geeky moments with different shows). When Laurel takes on her sister’s old role and becomes the “new” Black Canary, I think will find herself filling those same boots, but with a different approach. In the most recent episodes, she has been upping her vigilante-in-training skills with an instructor, and has even donned her sister’s leather jacket.

I want to see Laurel become stronger and more sure of her own strength. I want her to fit the role of Black Canary and really become a character that fans will finally appreciate, if they don’t already. She’s started an unfamiliar journey that will take her to some very dark and emotional places, but she will come out as another hero that Starling City needs.

Here’s one of the two official photos that the CW released this week of Laurel in her full Canary get-up. Yeah – she looks hot in it: