A “Happy Monday” to you all! Did you survive the weekend? How ’bout Valentine’s Day?

How many of you caught Deadpool during its opening weekend? I definitely did. My brother & I hung out Sunday and decided to catch the flick together, and we laughed our asses off and had a hell of a good time. Everyone over 17 needs to see this flick!

I have a decent amount of stories below to give you some reading material for the rest of the evening (if you’re in the States). For the rest of the world: enjoy all of the stories below. I do apologize for the videos not playing in your country if you’re outside the good ol’ U.S.A. (stupid region-locked videos). Throw on the music at the bottom of this post and read on through.

And don’t forget: ALWAYS be your geeky self. :D

I’m not spoiling anything that happened with the Valentine’s Day slaughterfest known as TWD’s mid-season premiere, “No Way Out.” This is an episode that will get fans back into the show if they didn’t really get drawn into Season 6A (like me). “No Way Out” is a heady, violent, tension-filled 42-minutes of the following: (semi)major character deaths, loads of dead undead corpses, and many great mini-scenes of character development.

The big new human threat was introduced in the first four minutes of the episode: a group of new dangers riding motorcycles and decked out in leather. Yup – Negan and his crew are entering the picture. Fans of the comic series know what that means: be prepared for lots of character deaths, including several that you love.

One of the biggest moments in the episode was a ‘ripped-from-the-comics’ scene that fans have been waiting for the past few years. The iconic and game-changing moment comes toward the beginning of the Alexandria story-arc in the comic series. Seeing that scene televised was one of those “OMG – they went there!” moments that fans will be talking about all year long.

SPOILER WARNING: The second video is a look at the first four minutes of “No Way Out” featuring Daryl, Sasha, and Abraham as they are stopped by members of Negan’s group. The full scene played out in the episode is absolutely nuts and the rest of the episode goes into insanity mode.

Looking Ahead at Season Two of BCS

Everyone’s favorite crooked-yet-noble attorney makes his triumphant and long-awaited return in the Season Two premiere of Better Call Saul. As an Albuquerque-an, it’s expected of me to watch it; the show is based here, after all. After last night’s amazing TWD episode, let Better Call Saul cleanse your palate and relax your mind…hopefully.

Holy Chimichangas, Deadpool! You Made All the $$$!

This Trailer Best Sums Up the Film

Deadpool made a crap-ton of cash this weekend and rightfully so. Go see the movie now. It’s a terrific, very adult film that is not meant for children at all. Ryan Reynolds also delivers the best performance of his career in a role that he was born to portray, with foul-mouthed accuracy and sexy abs. My favorite film of 2016 so far.

Can this be out already? Jon Bernthal as Frank Castle/The Punisher is a perfect casting choice, IMO. The upcoming season of Daredevil looks more dramatic and broodier than the first season. With the addition of Daredevil’s nemesis/love interest, Elektra Natchios, we can expect lots of conflict and fight scenes between them as well as Frank Castle. Bring it on already!

I’m still not interested in seeing the film – or at least until it hits the bargain cinema. Maybe DVD? I do admit that this is the best trailer released for the film: perfectly edited, showcases several brooding standoffs between the male heroes, and really sells the final product. Though it makes me wonder why they left this one for last to drum up fan support for it. This trailer is vastly superior to the previous ones.

The Newest Purge Film, Election Year, Gets a Trailer

Appropriate timing for this trailer in a major election year in the United States. I’ve never had the desire to watch any of the previous films, but I might give this one a shot. It has Frank Grillo and Elizabeth Mitchell starring in it, so that’s cool.

As with many TV shows throughout the years, I’m a little late to the John Oliver party. In my defense: I don’t subscribe to cable and only have Netflix/the Internet as my constant media companions. When I visited a family member last year, he got me into the show by showing me a few episodes, and I couldn’t stop laughing. Last Week Tonight with John Oliver took an extended holiday break, but it came roaring back with comedic vengeance last night on Valentine’s Day.

The big breaking news of the weekend was the death of U.S. Supreme Court Justice Antonin Scalia, and John Oliver delivered the news in the best way he could: fact with a side of sarcastic commentary. The biggest segment of the show was the video above about U.S. voting practices, Voter ID laws and their disenfranchisement of certain groups of voters, and fraudulent voting in state legislatures by proponents of the very laws they passed to stop what they’re currently doing in their own legislative houses. Learning is fun!

Game of Thrones Season 6 Trailer Brings on the Dead 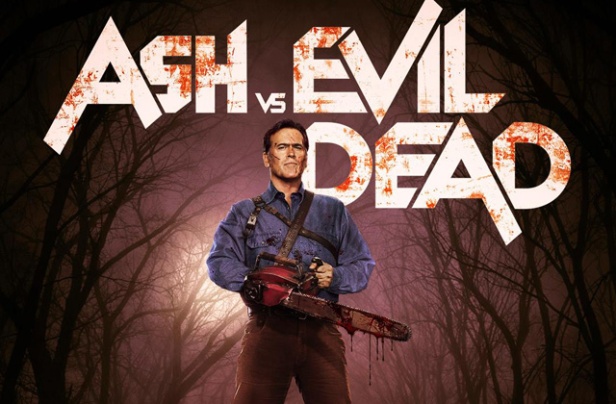 Lee Majors (The Six Million Dollar Man, Fall Guy) and Ted Raimi (no stranger to the Evil Dead franchise) are making appearances in the second season of one of my new favorite series: Ash vs Evil Dead. If you have not seen the series yet, why are you delaying? Go watch it! Ash, like Deadpool, is the adult anti-hero that we’ve been waiting for to deliver fun and mayhem, though his special brand comes on a weekly basis. The second season of the series will be airing later on in the fall (probably around Halloween again).

“Music From The Heavens” Clip

Lauren Ambrose and Robbie Amell make appearancea in tonight’s “Babylon” episode as two agents who could be younger mirror copies of Scully & Mulder. Like spookily so. They will also appear in next week’s season finale, “My Struggle II,” which continues the mythos-based story of the season premiere “My Struggle.” This should be good and wholely confusing… “My Struggle II” airs next Monday, February 22nd, so be prepared to have your theories and tissues in hand.

The six-episode season has gone by way too fast and I’ve been loving the episodes. I’m already sad about it disappearing from my TV ’til it (hopefully) makes a return next year. I’m so glad I have my Mulder & Scully Funko! figures to keep me company.

There’s a Disney  TV Remake of Adventures in Babysitting?

No Release Date Yet for Orphan Black Season Four;
Enjoy Some Teasers & a Trailer

BBC America has not released an airdate yet for the fourth season of the critically-acclaimed Orphan Black, which left us with plenty of cliffhangers at the end of Season Three. Let’s assume that Season Four will air sometime in April, as the show has since Season One. I’ve dealt with lots of my favorite shows being canceled within the last year, and I still have one that I’m waiting for a premiere date. I can’t remember if I shared these clips before, so I’m re-sharing them again. We need Orphan Black on our TV sets now!

The wait for the premiere of the fifth season of Person of Interest has felt like the longest hiatus ever. CBS has still not released any information, promos, teasers, etc. about the series – only a brief mention that it will be arriving sometime this spring. Not even a word about its cancellation or future. Just give us the show already, for the love of Root! Err…or whichever character is your favorite.